Barabrith is a traditional Welsh fruit loaf and on a recent trip to Wales, the first thing I did was head to a bakery to buy one.

There are many versions of Barabrith. Recipes are handed down from one generation to the next with a few tweaks along the way. Every family has their own method. Traditionally eaten on St David’s Day or Christmas Day, it is delicious sliced thickly and spread with creamy butter. My mother would eat it warm with custard or even toasted for breakfast. Filled with spices and dried fruit, the cake-like mixture has a lovely texture and smells delicious as it bakes in the oven. 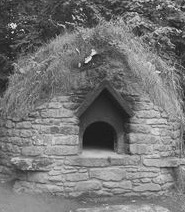 In days gone by when villagers did their weekly cook in the collective village oven, any leftover dough would be baked with dried fruit to produce delicious sweet bread. Originally lard was used as a shortening, whey as a liquid and yeast as a rising agent giving a dough-like texture. With rising agents becoming popular and added to flour, Barabrith today is made with self-raising flour making the final offering more like a cake. I like to soak the fruit in Earl Gray tea as the acid in the tea reacts with the fruit and gives a lovely flavour.

Bara brith can be found in many forms all over the world. Wherever Welsh settlers went they took the recipe with them. In Argentina, Welsh teahouses in the Chubut province still serve Torta Negra or Black Cake, as Barabrith is known. In the Welsh language, ‘Bara’ means bread and ‘brith’ translates as speckled.  If one says, ‘I’ve over spiced the bara brith,’ it means you’ve done something to excess. Every cafe in Wales serves the Welsh favourite and it is an easy recipe to adapt to your own taste. I like to add a spoonful of dark marmalade to the raw ingredients for extra flavour. 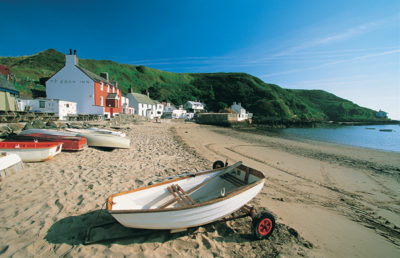 The Barabrith I bought on my recent trip was disappointing. It was dry and crumbly. Here’s my recipe which I hope is moist and tasty. The Barabrith keeps well in an airtight container and improves after a day or two – if you can keep it that long! 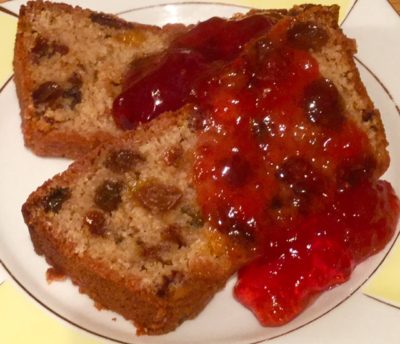 Soak the fruit and sugar in strained tea and leave overnight. Next day, line a 900g loaf tin with baking parchment. Mix all the other ingredients into the fruit mixture and beat well. Pour into the loaf tin and bake for approximately one and a half hours.

Store in a tin or airtight container.