I’ve long been a fan of Sandra Danby’s writing and with the publication of her new book, Connectedness, it was a good opportunity to have a chat with the author herself…

Tell me a little about Sandra Danby the person and why you write.   I write because I can’t not write. It’s what I love doing… telling a story, finding the right way to tell it, inventing things, shaping it. Any day away from my desk feels like a lost day. I have loved reading from my Janet and John days through Enid Blyton to Mary Stewart, then an English degree followed by +35 years as a journalist. When I had the chance to write fiction seriously I found it difficult to unshackle myself from my journalism training, to loosen up and let my imagination go rather than worry about researching facts and getting everything right. I’m getting there now.

I love the cover of your new book, Connectedness, can you explain why you chose this? 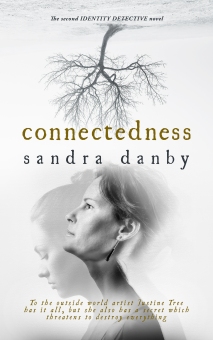 It is lovely, isn’t it? I’m so pleased with my ‘Identity Detective’ series covers, they were designed for me by Jessica Bell who asked incisive questions about characters, imagery, themes, symbols and excerpts before starting work. The tree represents our connections to known and unknown branches of our family, and it is the recurring image of all my book covers. The nodding woman was Jessica’s idea and it is a wonderful way of showing Connectedness is the story of one woman at two different stages of her life; as a twenty-something art student, and as successful artist in her fifties. As mature adults, we are all the sum of our previous life experiences and Justine Tree, the artist in Connectedness, certainly is.

The title is unusual – how did you come up with, Connectedness?

The title came early in the writing process, one day I was playing with words to do with family, relations, , identity, the sense of belonging, connections, and ‘Connectedness’ came into my mind clearly and strongly. The step of making it into the name of Justine’s new art collection came much later when I was re-drafting.

This is the second book in the Identity Detective series. Can you explain what the series is all about?

Rose Haldane reunites the people lost through adoption. The stories you don’t see on television shows. The difficult cases. The people who cannot be found, who are thought lost forever. Each book in the ‘Identity Detective’ series considers the viewpoint of one person trapped in this horrible dilemma. In the first book of the series, Ignoring Gravity, it is Rose’s experience we follow as an adult discovering she was adopted as a baby. Connectedness is the story of a birth mother and her longing to see her baby again. Sweet Joy, the third novel that I’m writing now, will tell the story of a baby abandoned during The Blitz. Each novel is a mystery about adoption reunion, family secrets and romance, lost and found.

It is a clever author who links their books in a series this way. Is the subject matter personal to you? Do you identify with the lead character Rose Haldane or is she like anyone you know?

I’m asked this a lot! I write adoption mysteries but I’m not myself adopted. I was however over-imaginative as a child, the youngest of three with quite a gap before I came along. So I used to imagine exotic parents who were foreign, royal, adventurers, the usual childhood fantasies. As I grew older this developed into a fascination of how we become who we are; is it blood and genes, or upbringing and experience? A mixture of the two? And if you were a cuckoo in the family but not told about it, would you sense it? Rose is a journalist because I was one and I knew her world but though she started off as a mixture of myself and my fellow journalists, she evolved into her own person.

What’s next in the series?

Sweet Joy tells the story of Theresa, an elderly lady who feels she has one last chance to answer the questions of her birth. On the night of November 29, 1940, Twickenham endured a horrendous night of bombing in The Blitz. In the rubble of a bombed house, an ARP warden finds a baby untouched by the devastation. She is healthy and obviously cared for, but she is alone and no adults are found near her and no one claims her.

The locations in Connectedness are beautifully described. Do you have a strong knowledge of Filey (Yorkshire), Málaga (Spain) and London and if so, what are your connections and why did you want to write about these locations? 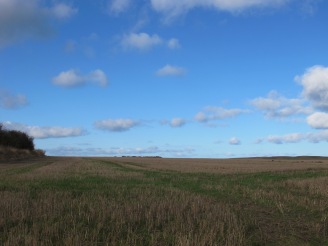 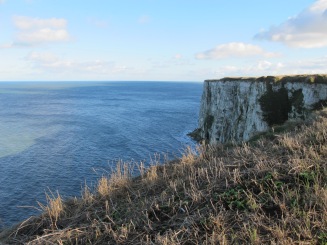 Yes I know each of the locations intimately and hope it shows in my writing. I grew up on the East Yorkshire coast and, though I merged several locations into one and invented Justine’s cliff top home Seaside Cottage, the place is very dear to me. I have lived in and around London since I was eighteen when I travelled south to university while Spain has been my home for the last ten years. We live inland from Málaga in the beautiful countryside around Ronda and are frequent visitors to the city for its art, its food and the beaches. I used many of my experiences as a newcomer in a foreign country to enrich Justine’s arrival in Málaga as a foreign student at art college. Her struggles with ordering coffee, buying bread and attempts to make herself understood are things that happened to me.

You cover the art world in depth in Connectedness – did this involve a great deal of research?

A fair amount of research and reading but I can’t say it was hard work. I have always loved art but never studied it so I had a very superficial understanding. I gradually built up my knowledge by reading, watching documentaries and visiting exhibitions, by not limiting myself to artists I was familiar with but consciously exploring periods and styles new to me. The Málaga location also provided the connection to Pablo Picasso who was born in the city. He was a childhood inspiration for Justine as she, like the young Picasso, drew the birds she saw around her every day as a child, mostly seabirds and pigeons.

You have received some fabulous reviews for Connectedness – will we be seeing more in this series and when?

Thank you! I am a slow writer so it will be three years or so before we see Sweet Joy. I often wish I could write quicker but I have health issues that make it difficult for me to spend long periods at the computer. So I tend to break up my days, combining writing one novel at the computer and then later in the day taking a break away from my desk while researching the next. So I am currently researching book four in the ‘Identity Detective’ series, currently title-less, which will be set again in Yorkshire.

What’s your favourite and why:

Tipple  Does tea count? I’m tee-total now as alcohol stopped agreeing with me.

Outfit  I’m a jeans and t-shirt girl, a scarf around my neck and New Balance trainers on my feet.

Film  All the President’s Men. The film that made me aspire to be a journalist. My second choice is another Redford film, Butch Cassidy and the Sundance Kid. What a fantastic script by William Goldman. 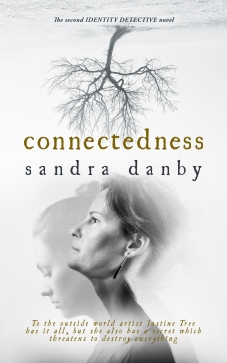 TO THE OUTSIDE WORLD, ARTIST JUSTINE TREE HAS IT ALL… BUT SHE ALSO HAS A SECRET THAT THREATENS TO DESTROY EVERYTHING

Justine’s art sells around the world, but does anyone truly know her? When her mother dies, she returns to her childhood home in Yorkshire where she decides to confront her past. She asks journalist Rose Haldane to find the baby she gave away when she was an art student, but only when Rose starts to ask difficult questions does Justine truly understand what she must face.

Is Justine strong enough to admit the secrets and lies of her past? To speak aloud the deeds she has hidden for 27 years, the real inspiration for her work that sells for millions of pounds. Could the truth trash her artistic reputation? Does Justine care more about her daughter, or her art? And what will she do if her daughter hates her?

This tale of art, adoption, romance and loss moves between now and the Eighties, from London’s art world to the bleak isolated cliffs of East Yorkshire and the hot orange blossom streets of Málaga, Spain.

Sandra Danby is a proud Yorkshire woman, tennis nut and tea drinker. She believes a walk on the beach will cure most ills. Unlike Rose Haldane, the identity detective in her two novels, Ignoring Gravity and Connectedness, Sandra is not adopted.