Bristol born writer, Nick Jones,  lives in Cheshire and is the best-selling author of Gagged & Bound – a brilliant book series of gags and puns that will have you laughing out loud. I wanted to know more about an author who changed direction when he recently published a highly original children’s book entitled, Sarah’s Shadow.

Welcome to the blog, Nick. Tell me a bit about your background and how you got into writing?

Hi Caroline – thank you for inviting me!

Well, for the past 14 years I’ve been a proofreader and editor, and over that time my business has grown to the point where I have a team of freelancers to whom I can outsource some of my work, which was convenient because I’m also the father of two young children and get to spend a lot of time with them. 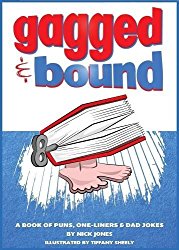 Around four years ago, after reading one of Tim Vine’s joke books, I decided to start writing jokes. It was always just for fun – I’ve never had a desire to go down the stand-up comedy route! It was just nice to have a creative outlet to break up the tedium of proofreading and changing nappies. Also, formulating jokes was pretty much the only constructive thing I could think to do when bottle-feeding my son or waiting for what feels like hours in the middle of the night for him to go back to sleep, as I couldn’t really look at my phone in those situations.

What made you switch from writing joke books to children’s stories?

Two things happened. Firstly, when you’ve come up with three books’ worth of jokes (around 1,500 in total), you start to dry up – well, I did anyway. My jokes are nearly always based on puns or common phrases, so you start to run out of words to base jokes around eventually. I still come up with a new gag occasionally, and I store them on my computer for future use, but I’ve stopped proactively writing jokes, at least for the time being. I’ve gone from about five jokes a day to probably one a week!

My switch to children’s books was a bit serendipitous. Like a lot of people, I often felt that I could write a children’s book if I put my mind to it, and this belief became stronger when I had a child of my own and would sit and read all these picture books thinking, ‘I could write something like this.’ But the thing stopping me was the lack of a good idea for a story. Whenever I tried to think of something, I could only think of generic ideas that have been done before. Then one night my then-four-year-old son asked me to make up a story rather than read him a book. So I just started talking and the idea of a child losing their shadow just popped out. I knew straight away that I had finally stumbled on an idea that I could work with. So I got lucky in that respect, and I have my son Lucas to thank!

I adore Sarah’s Shadow. It’s a wonderful children’s book. Is there a message behind it?

Thank you so much! Yes, the underlying messages are to be comfortable in your own skin and to face your problems rather than wish them away. Sarah is picked on in the playground for the way her shadow looks, so she wishes she didn’t have one at all. But when she loses her shadow, that’s when her problems really start. Of course, when the bully picks on Sarah for her shadow, she is also making fun of her body, so the book deals with body image too, but in a subtle and gentle way. I don’t think children’s books need to ram the moral message home too much.

A message that continues through life. Were you personally motivated by any one thing to write the book?

Yes, my personal motivation was to publish the book for my kids first and foremost. To give them something that would last forever. I guess I also wanted to prove that there was more to me than just writing silly jokes (and they are very silly jokes). Now that the book is out there, I want to write more.

Si Clark, a London-based artist, illustrated Sarah’s Shadow – what’s your connection and will there be further collaborations?

Si is a friend of mine. I was friends with his brother Graham back when I lived in Bristol, and I met Si through Graham one year at a music festival called All Tomorrow’s Parties. In 2011, knowing that Si was a talented illustrator and animator, I commissioned him to create an animated trailer for my proofreading business. We really enjoyed working together on that, so when I came up with the premise for Sarah’s Shadow I instantly knew that Si was the man for the job! I’ve written another children’s story and plan to work with Si again on that. Ideally, I’d like to work with him on all future books as I really love his quirky, original style.

I adore your Gagged & Bound books and you clearly have a gift for humour – where did this come from?

Haha, well my dad would say my gift for humour came from him, but I reckon there must have been a witty milkman doing the rounds in Bristol 40 years ago.

That takes me back – not Ernie by any chance? What’s your writing routine?

When I was writing the joke books, I would never sit down at my desk and try to think up jokes. Instead I just kept my eyes and ears alert to anything around me that could be used in a joke. So, if someone said a certain word that sounded like another word, it might trigger the joke-writing process. For example, one of my jokes goes like this: What happens when a herb gets into debt? It receives a visit from the bay leaf. That just stemmed from the realisation one day that ‘bay leaf’ sounds like ‘bailiff’.

My writing routine for children’s books is even simpler: when I get an idea for a story that I’m happy with, I just sit down and start writing! I’m a big believer in Amelia Earhart’s saying, ‘The most effective way to do it is to do it.’ Just write the thing, get it down on paper and then edit, edit, edit! Of course, this is easy for me to say as my stories are very short!

What books do you enjoy reading?

Since having kids, I enjoy reading children’s books more than anything. I just ordered a collection of Roald Dahl’s books for my son’s birthday, partly for his benefit but also so that I can re-read all of his classics. I also enjoy David Walliams (doesn’t everyone?). In terms of adult fiction, I’m a big fan of an author from Barnsley called M. Jonathan Lee. His semi-biographical novel about depression, A Tiny Feeling of Fear, really grabbed me – and he’s very good at twists!

How long does it take you to write a book?

Each joke book took around six months to write. Sarah’s Shadow took one Saturday morning to get down in rough draft form and then a few weeks of tweaking. Thanks to my day job of running an editorial business, I’m lucky to have a circle of talented and experienced proofreaders, editors and writers to help me polish my books. Alexa Tewkesbury, Ben Corrigan and Marion Adams all deserve a shout-out as they really helped me to turn Sarah’s Shadow into something to be proud of.

What a gift to have that team around you! Have you any advice for aspiring writers?

My main piece of advice to aspiring writers who are planning to go the self-publishing route is not to cut corners. I know that employing a professional editor, proofreader and cover designer can be expensive, but these are necessities if you want to be taken seriously and you want people to buy your book. Skimping on these services will only come back to haunt you (in the form of negative reviews, or worse still, no reviews at all!).

Great advice and I totally agree. I understand that you have plenty more ideas for books, can you share these here?

There are several ideas bubbling away in my mind, yes! The one I’m working on at the moment is about a discontent slug. It will share similarities to Sarah’s Shadow in terms of its message, but it will be told in a more amusing, light-hearted way.

You married a girl from Cheshire and now live in Congleton, the town where I was born. Congleton, the town that sold it’s bible to buy a bear, is known for its famous dancing bears. Going forward, will we see a children’s book with this as the theme?

Yes, I do have a vague idea for a children’s book about Congleton – are you psychic?! I’m going to keep the idea to myself for now, though, while I’ve figured out the story. Until then it will just have to keep bubbling away with the others!

Now I’m smiling – I had mystic powers in another life. Great talking to you Nick, huge thanks for your time and fascinating post and wishing you masses of success with all your writing projects going forward.

If you’d like to get a free joke book (and I can highly recommend it!) – head over to Nick’s website:

Treat your children to this lovely book:

Grab your copies of Gagged & Bound

Please get in touch with Nick on the links below: